The biggest sports event of the year is almost upon us, as Super Bowl LIV weekend is in full swing. As of this article posting, the Kansas City Chiefs are just 1.5-point favorites against the San Francisco 49ers. This matchup is expected to have a decent amount of scoring despite the competent defenses, with the game total currently sitting at 54.

We’ll be breaking down everything you can bet on this weekend in a three-part series: 1) Game Props, 2) Player Props, and 3) Everything Else You Can Think of to Bet On.

It’s time to talk game props! There’s no shortage of outcomes that you can bet on, but we’ll cover the majority of them in a brief overview in this article. You’re able to bet anything from the amount of field goals made per quarter, to a head coach getting a challenge overturned, to which team is winning at the end of the third quarter. The options are plentiful, so make sure to bet accordingly!

Do we even know if these two teams are aware that punting is part of football? Neither team ever punts, but this bet could be one to get some action on. If you have a coin toss prop bet in play, you might want to pair it with the team you think is going to get the ball first. There’s a pretty good chance that the first few drives bring Super Bowl jitters for the offenses, so I would expect a few punts in the first quarter. If you have a good feeling on who’s getting the ball first, it would be smart to pick that side to also punt first.

Both offenses are incredible at moving the ball in their own way, but they are also going up against pretty stout defenses. I don’t think this is going to be a game of all touchdowns, so getting on field goals in the second and fourth quarters makes the most sense. Again, you have to go with your gut and predict scenarios on how you think the game plays out. If you have a hunch that both teams drive or struggle in certain quarters, you may want to put some money on both teams not hitting a field goal in the first. 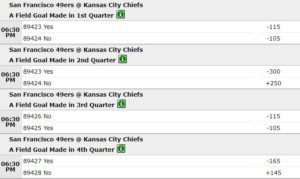 One thing that we won’t have a shortage on in this Super Bowl is touchdowns. The line is currently sitting at 6.5 touchdowns for the game, coinciding with the game total of 54. If you have a hunch that this game goes under, you may want to get a piece on the under of 6.5 touchdowns. You’ll also want to bet on some of the field goal props if you think either team struggles in the red zone.

Interested in other things to bet on? Take a quick read about the craziest things you can bet on for Super Bowl LIV.