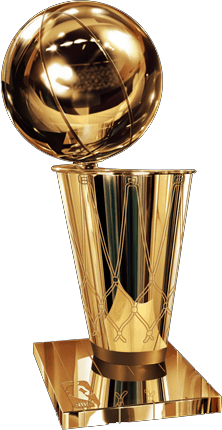 The National Basketball Association (NBA) Finals is a best of 7 series between the Eastern Conference Champion and the Western Conference Champion to determine the overall league champion.  Basketball is most definitely an international sport with professional leagues all over the globe.  Even so, most basketball experts consider the NBA to have the highest level of competition in the world.  For that reason alone, the NBA Championship is extremely prestigious.

The road to the NBA Finals is extremely grueling and competitive.  The NBA consists of 30 teams (29 in the USA, 1 in Canada) and every year they play an 82 game regular season usually beginning in October and ending in April.  The 30 teams are geographically divided into the Eastern and Western Conferences.  At the end of the regular season, the top 8 teams in each conference continue into the playoffs.

The specific format of the playoffs changes from time to time.  Currently, every round is a best of seven series where a team must win four games to advance.  In every round including the first round the teams are seeded based on regular season record with the higher ranked team having home court advantage.  All 16 teams play in the first round with the 8 winners (four in each conference) advancing to the Conference Semifinals.  There another 7 game series awaits from which two teams in each conference will emerge victorious.  These teams will compete in the Conference Finals—also a best of 7 series—for the right to advance to the NBA Finals to play for the championship.

How to Bet On the NBA Finals

Betting on the individual games of the NBA Finals is identical to betting on any other professional basketball game.  The NBA playoffs offer fans a couple of other bet types including series bets (picking the team that will win each series) as well as futures betting where bettors can wager on which team will ultimately claim the title.  BetOnline.ag also offers Conference championship futures markets where you can bet on which team will advance to the NBA Finals from the Eastern and Western Conferences.

NBA championship futures betting is pretty much the same as future markets in NHL hockey or NFL Super Bowl futures.  Just pick the team you think will win.  If they end up taking the championship you’ll be paid according to their price.  At press time, the top five teams to win the NBA Championship are the Los Angeles Lakers (+210), Milwaukee Bucks (+275), Los Angeles Clippers (+300), Boston Celtics (+1200) and Houston Rockets (+2000).

Betting on NBA Championship futures is easy.  Let’s use the example of a player making a $100 bet on the Milwaukee Bucks to win the NBA Championship.  If the Bucks end up taking the crown the player will receive $375 in return representing the $100 original stake and $275 of profit.

Conference Futures work the same way.  At the time of this writing the top three teams in the Eastern Conference are the Milwaukee Bucks (-225), Boston Celtics (+650) and Toronto Raptors (+800).  In the Western Conference, the Los Angeles Lakers are the top choice at +120 followed by the Los Angeles Clippers (+210) and Houston Rockets (+1000).

BetOnline.ag offers bettors a chance to wager on the outcome of each Best of 7 series.  A price is set for each team and the team that advances from the series cashes the bet.  Here’s a hypothetical example:

Some series have a much more lopsided price.

Don’t forget that many matchups have more to do with public perception as they do with the qualitative characteristics of each team.  Sometimes you’ll find a popular team or a team from a major market against a smaller market team.  Often the ‘more popular’ team will get more financial backing for that reason alone which can create a nice value betting the other way.

NBA basketball games are primarily bet using a pointspread.  One team is favored by a certain number of points.  Unlike NFL football, which has ‘key’ numbers such as 3 and 7 that occur more frequently than others, there are no ‘key’ numbers in NBA basketball betting.  While there are no key numbers as such many expert basketball handicappers view the game in terms of ‘possessions’ which can correlate to specific pointspreads.

Here’s a hypothetical NBA pointspread that has the Denver Nuggets playing the Utah Jazz at the Vivint Smart Home Arena in Salt Lake City:

Traditionally, the home team is listed on the bottom of a betting proposition.  This dates back to the time when lines were displayed on chalkboards and dry erase boards but is still very common today.

In this matchup, the Utah Jazz are -5.5 point home favorites over the Denver Nuggets.  Home court advantage is considered very important in NBA basketball.  There is often a significant disparity between the way a team plays at home and on the road.  The Jazz have a history of being very tough in Salt Lake City and not great on the road so we’ve reflected this in the pointspread between these otherwise evenly matched teams.  Note that Denver isn’t impacted by something that many teams visiting Salt Lake City struggle with—the altitude.  For that reason, you might see a team of equal skill from near sea level get an additional point or two.

Pointspread bets are simple—using this example, the Utah Jazz must win the game by six or more points to win the bet and cover the pointspread.  The Denver Nuggets must win the game outright OR lose by 5 points or fewer. Unless specified otherwise, NBA pointspread bets are usually priced at 10/11 meaning that a bettor must lay $110 for every $100 he wants to win.  You might see a half point in a point spread designated by an apostrophe (‘) though this is becoming much less common with the majority of sportsbooks using digital odds displays.  Back when sportsbooks had to write everything by hand it was easier and less time consuming to use the apostrophe instead of writing out the fraction or decimal equivalent.

Not all NBA pointspreads will involve a half point.  We’ll once again look at the previous example but tweak the line slightly:

Now the Jazz must win by 7 or more points to cash tickets for their financial backers.  The Nuggets must win outright or lose by 5 or fewer points.  If the Jazz win by 6 the game lands right on the pointspread and is graded a ‘push’ or tie and bets on both sides are refunded.

You will also see moneylines in NBA basketball though they’re not as popular as pointspread bets.  Here’s what the moneyline on the hypothetical game from above might look like:

You’ll often see either the ‘Over’ or ‘Under’ favored.  For example:

In this example, it looks like the sportsbook is expecting a low scoring defensive battle and has priced the ‘Under’ accordingly.

Live betting is one of the fastest growing types of betting throughout all sports.  The NBA Finals are a perfect live betting opportunity and most sportsbooks will offer in-game pointspreads and totals.  You may also find live betting offering proposition and fantasy sports type bets.

The National Basketball Association is the second most popular professional league among North American sports betting enthusiasts.  Founded in the mid 1940’s, the NBA is considered to be the highest level of basketball play in the entire world. The NBA consists of 30 teams (29 in the USA, 1 in Canada) that play an 82 game regular season beginning in October and ending in April. That is followed by the NBA playoffs, in which the top 16 teams in the league via for the championship. There have been a total of 19 teams to win the NBA title with the Boston Celtics (17 championships) and the Los Angeles Lakers (16 championships) taking down the most titles.  In 2019, the Toronto Raptors won the NBA Championship making them the first Canadian team to win.  There are six franchises that have never reached the NBA Finals.  The Los Angeles Clippers (formerly the Buffalo Braves and San Diego Clippers) date back to 1970 giving them a 49 year run of futility.  Also never reaching the NBA Finals are the Denver Nuggets, Minnesota Timberwolves, the Charlotte Hornets (Charlotte Bobcats), Memphis Grizzlies (formerly the Vancouver Grizzlies) and the New Orleans Pelicans.