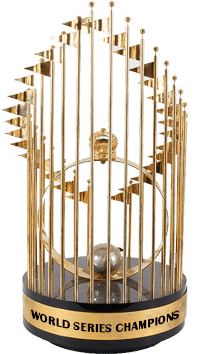 Professional baseball in the United States dates back to the mid-1800’s but the World Series as we know it today began in 1903.  It is the annual matchup between the National League Champion and American League Champion to determine the overall champion of Major League Baseball.  The National League began play in 1876 but the American League dates back to only 1901.  It took a couple of years for the leagues to work out a deal to play each other at the end of the season.  At that point, the two circuits were fierce competitors not only on the field but for the loyalty of fans and the revenues they brought with them.  Although the two leagues started to work together more closely over the years they remained separate business entities until the year 2000 when both leagues merged into a single organization with the Commissioner of Baseball providing oversight.

How to Bet on the World Series

Most people are aware of the Super Bowl futures odds that are released for the following year not long after the game is completed.  MLB World Series odds are similar and easy to understand.  The sportsbook posts a price on each team reflecting their probability of winning.  A player bets on a team and if they emerge victorious they receive a payout based on the moneyline price.  At the time of this writing the top five teams on the World Series futures betting board are the Los Angeles Dodgers (+375), New York Yankees (+450), Houston Astros (+1200), Atlanta Braves (+2000) and Minnesota Twins (+2000).

Here’s an example of how MLB futures betting works.  Let’s say you bet $100 on the Houston Astros to win the World Series.  If the Astros wind up as the champions of Major League Baseball you’ll receive $1300 in return representing your $100 original stake and $1200 of profit.  On the other hand, if you bet on the New York Yankees for the same amount and they win you’d receive a much smaller profit of $450 in addition to your original $100 wager.

Sportsbooks will post odds to win each MLB postseason series up to and including the World Series.  The World Series itself is a best of 7 matchup where the first team to win 4 games is declared the winner.  Here’s a hypothetical series moneyline:

One important thing to remember in sports betting including Major League Baseball is that series prices often reflect the popularity of each team and not just their intrinsic ability.  A team like the New York Yankees will often ‘pay a premium’ in terms of line value.  A less popular team like the Minnesota Twins will frequently offer betting value if they are matched up against a more popular team.

Baseball isn’t a good pointspread sport since a team can dominate their opponent and win by 1 run or a dozen runs.  For that reason, the primary method of betting on MLB baseball games is on the moneyline.  The moneyline is one way of representing fractional or decimal based odds to win that is most popular in North America.  Here’s a hypothetical moneyline matchup:

If you want to bet the Reds you’ll get +125 for every -100 you bet.  Alternately, you’ll receive $1.25 back for every $1.00 you bet on the Braves or $125 for every $100. The differential between the price on the favorite and takeback on the underdog is where the sportsbook makes money.  In this case, we’ve got a .20 cent line.  The smaller the line differential, the better.  The best you can really hope for is a .10 cent line (also known as a dime line) though you can occasionally find a ‘nickle line’ offered by sportsbooks usually as limited time promotions.

Pointspread bets are simple—using this example, the Utah Jazz must win the game by six or more points to win the bet and cover the pointspread.  The Denver Nuggets must win the game outright OR lose by 5 points or fewer. Unless specified otherwise, NBA pointspread bets are usually priced at 10/11 meaning that a bettor must lay $110 for every $100 he wants to win.  You might see a half point in a point spread designated by an apostrophe (‘) though this is becoming much less common with the majority of sportsbooks using digital odds displays.  Back when sportsbooks had to write everything by hand it was easier and less time consuming to use the apostrophe instead of writing out the fraction or decimal equivalent.

Although moneyline wagers are most popular in baseball there is a bet type that is roughly analogous to a pointspread.  This is the run line wager.  In the majority of cases, the run line on a game is +1.5 or -1.5 runs.  It works just like a pointspread.  The team laying -1.5 runs must win by 2 runs or more to cash the bet.  The team getting +1.5 runs must win the game outright or lose by just 1 run.

Here’s how a runline bet would look on the betting board:

The baseball runline has more in common with NHL hockey’s puck line than anything else.  The favored team in the moneyline matchup will be laying runs but at a ‘plus money’ price.  The opposite is true for the underdog.

Baseball totals are very popular all year long and that includes the World Series.  Betting totals in the MLB World Series works just like any other sport.  The sportsbook posts a total runs number and you can bet whether it will go ‘Over’ or ‘Under’.  There is usually a moneyline attached to each side of the proposition.  For example:

Not all run totals include the half run.  You might see:

If the total runs lands exactly on 11 the total is a ‘push’ and all bets are refunded.

The World Series has been played 115 times to date with the American League winning 66 and the National League winning 69.  Home field advantage in the World Series used to be given to the league that won the annual All Star Game but starting in 2017 it started going to the team with the better regular season winning percentage.

The first World Series played in 1903 saw the Boston Americans defeat the Pittsburgh Pirates.  No series was held in 1904 but it has been held annually since with the exception of 1994 when the World Series was called off due to a players’ strike.  The New York Yankees have won the World Series 27 times which is by far the most of any team.  The most successful National League team is the St. Louis Cardinals who are also #2 for most World Series victories.  The Boston Red Sox and Oakland Athletics (previously in Philadelphia and Kansas City) have each won 9, the New York/ San Francisco Giants have won 8 with the Brooklyn/Los Angeles Dodgers winning 6 World Series championships.   The 2019 World Series Championship was won by the Washington Nationals who defeated the Houston Astros in 7 games.