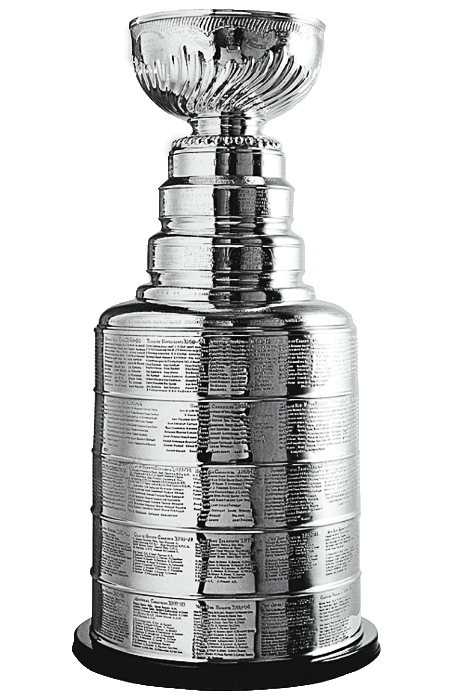 The Stanley Cup is the trophy awarded to the champion of the National Hockey League (NHL) and as such is the most sought after trophy in the sport.  At the end of the NHL regular season the top eight teams from the Eastern and Western Conferences begin the quest for the oldest prize in North American professional sports.  While every pro sport has a highly coveted championship none can rival the intensity of the Stanley Cup playoffs.  There is no such thing as an ‘easy’ series in the Stanley Cup playoffs and even top seeded teams face a tough test in their first round matchup.

The Stanley Cup itself is unlike any other trophy in sports.  It has been repaired and expanded over the years but it began from a small silver cup with one ring on the bottom.  Like the Canadian Football League championship trophy (the Grey Cup) the idea was that teams could add a ring and engrave their names on trophy to commemorate their championship season.  It didn’t quite work out like that and starting in 1907 teams started engraving their names on the cup bowl itself.  A second band was added in 1909 but for some reason the next few champions didn’t engrave their name on the cup.  In 1915, the Stanley Cup Champion Vancouver Millionaires engraved their names on the trophy but even they didn’t stick with the format—instead they put their names on the inside of the bowl.  The engraving began to be an annual tradition in 1924 when the Montreal Canadiens added another band to the cup.  Every winning team since has engraved their names on hockey’s most prestigious trophy.

How to Bet On the Stanley Cup

On a game by game basis, betting on the Stanley Cup playoffs is identical to betting on any other NHL hockey game.  During the playoffs, however, most sportsbooks offer players the opportunity to bet on the outcome of each head to head series as well as offering a futures betting market for the eventual Stanley Cup winner.

Stanley Cup futures betting is identical to futures betting in any other sport.  Most every sports bettor is familiar with Super Bowl futures and Stanley Cup futures work exactly the same way.  Before the season begins, a sportsbook will set a price on each team to reflect the probability of them winning the NHL Championship.  For example, at the time of this writing the four top teams on the Stanley Cup futures betting board are the Boston Bruins (+650), Colorado Avalanche (+750), Tampa Bay Lightning (+750) and Vegas Golden Knights (+750).  At the other end of the spectrum are the longshots priced to reflect that they have little or no chance to win—and in some cases have little or no chance to make the playoffs.  Currently, the bottom three teams are the Columbus Blue Jackets (+10000), Chicago Blackhawks (+25000) and Montreal Canadiens (+100000).

Betting on Stanley Cup futures is simple.  Just pick the team you want to back and if they win you get paid accordingly.  For example, let’s say you bet $100 on the Colorado Avalanche to win the Stanley Cup.  If they end up taking the title you’ll receive $850 in return—your original $100 stake plus $750 in profit.

Like baseball, NHL hockey is primarily a moneyline oriented sport.  For that reason it’s not a surprise that betting on a Stanley Cup playoff series isn’t much different than a series prop during the major league baseball season.  NHL hockey playoff rounds are ‘Best of Seven’ format meaning that the first team to win four games advances to the next round.  A series bet is very similar to a game moneyline bet—the sportsbook posts a price on each team and you bet on the one you think will win.  Here’s a hypothetical Stanley Cup Finals series line:

These prices suggest a very competitive series.  Not all playoff series are so evenly matched.  Here’s a hypothetical opening round series:

The price on this series indicates an easy Tampa Bay win but this is by no means guaranteed.  During the 2019 Stanley Cup playoffs Tampa Bay finished as the top team in the league with 128 points.  Columbus was the #8 seed with 98 points but the Blue Jackets beat the Lightning in four games as Tampa Bay became the first regular season league champion in history to be swept in the first round.

Moneyline side plays on individual playoff games are identical to regular season NHL games.  Each team is assigned a moneyline price with the favorite given a ‘minus number’ and the underdog a ‘plus number’.  An example will make this clearer:

While a relatively low scoring sport like hockey doesn’t lend itself to a pointspread as does football there is a similar bet.  If you’re familiar with a handicap bet in soccer it’s essentially the same and combines the moneyline with a ‘puck line’ representing a specific number of goals.  Back to our hypothetical game from above.

In this example, Colorado must win the game by 2 or more goals to cash tickets for their backers.  Vegas must win the game outright or lose by a single goal.  Notice the difference in the moneylines.  In a low scoring sport like hockey every point is valuable which is why Colorado is now a ‘plus money’ choice.  They have the tougher task to cover the -1.5 puckline.  Likewise, Vegas is getting +1.5 goals but they come at a price—in this case, -210.  During the regular season, approximately 15% of all games are tied at the end of regulation and right around 27% are decided by a single goal.  In the playoffs, these percentages are higher.

Stanley Cup totals are just like regular season NHL totals.  The sportsbook posts a total and you can bet ‘Over’ or ‘Under’:

Most of the time in hockey one result will be the ‘favorite’ and more likely to occur.  For example:

Live betting has become an increasingly popular part of the sportsbook experience and NHL hockey is no different.  BetOnline.ag will offer adjusted moneylines, totals and puck lines throughout the game and between periods.  Some sportsbooks will include props such as ‘next team to score’, etc.  At one point, live betting was almost exclusively done by ‘sharps’ but now even novice bettors are familiar with it.  Many live betting prop bets are derived from fantasy sports so no matter the experience level of a player they tend to pick it up quickly.

The Stanley Cup itself has a unique and fascinating history that dates back to 1892.  At the outset, we talked about the tradition of engraving the Stanley Cup and it has grown in size over the years to accommodate all of these names. It was originally a silver bowl donated by the Governor General of Canada, Lord Stanley of Preston.  The Stanley Cup has grown in size and stature and now stands over 3 feet tall and weighs over 35 pounds.  It was originally awarded to the top amateur hockey team in Canada. In 1915, it became the top prize of professional hockey.  It has been awarded every year since 1892 with two exceptions—in 1919 a severe flu epidemic prevented the championship series from being completed, and more recently in 2005 during the NHL lockout.

The first US team to compete for the Cup was the Portland Rosebuds of the Pacific Coast Hockey Association in 1916, and the first American team to win the Cup was the Seattle Metropolitans the following year.  The Montreal Canadiens have won the Cup 24 times, more than any other team.  Former Canadiens great Jean Beliveau’s name appears on the Cup more than anyone else—he’s listed 17 times, 10 as a player and 7 as management.