Nevada’s unemployment rate hovered near 30% in April. The gaming revenue figures for the month go a long way toward explaining why. With the state’s gaming industry shut down for the entire month of April everyone was bracing for some downright ugly revenue numbers and they got them: April 2020’s gaming revenues represented a mind boggling drop of 99.6% from April 2019.

The air travel figures tell the story but the Las Vegas Convention and Visitors Authority underscored the extent of the carnage with their monthly visitation figures. Overall visitor volume fell to 106,900 in April 2020–a drop of 97% from 2019. Convention traffic dropped to zero in April for a decline of 100% from the previous year. Hotel occupancy figures were also ugly–not only were most of the city’s hotels closed travel to the area was also nonexistent. Hotel occupancy in April 2020 was 1.7%. By way of comparison, occupancy during the nadir of the ‘Great Recession’ was in the 70% range. With the major casino resorts not reopening until early June there’s every reason to expect May’s visitation numbers to be just as bad.

The macro view of Nevada’s gaming industry in April 2020 is bad. The ‘micro’ view is not only bad it is in some cases downright bizarre. The revenue decline in Clark County was 99.5% and 99.3% on the Las Vegas Strip. Downtown Las Vegas saw a 99.3% drop from the previous year while North Las Vegas was down 99.9%. In April 2019, Nevada’s casinos won $936.5 million from bettors. In April 2020, they managed to take in $3.6 million. Since the only revenue coming in was from mobile sports betting apps and the rake from online poker play the $3.6 million hold is impressive given the circumstances. Keep in mind that the betting board was extremely limited in April–Russian table tennis drew the most action along with European soccer, Eastern European hockey and esports.

Now the bizarre–with sportsbooks paying out refunds on canceled events and cashing tickets for events that had already been decided a number of areas experienced declines over over 100%. Boulder Highway’s gaming properties experienced a revenue decline of 100.07%. Mesquite (100.04%) and Laughlin (100.03%) also exceeded 100% revenue decline. Northern Nevada had it even worse–Washoe County was down 100.12% while North Lake Tahoe saw a 100.28% drop. Another bizarre occurrence was a derivative of so many properties paying out more than they took in–Clark County won $3.7 million from bettors while the entire state took in $3.6 million. That’s never happened before and with the possible exception of May it’ll likely never happen again.

For someone who reads the Nevada gaming revenue reports every month the strangest thing might have been what *wasn’t* reported: 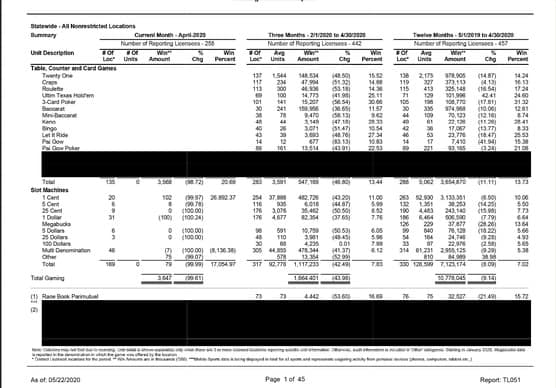 The detailed revenue figures for games, slot machine denominations and sports betting were redacted. Nevada gaming regulations mandate that revenue figures be released in aggregate. The numbers for each individual licensee are intended to be kept confidential. With so few licensees operating sports betting apps and/or online poker during April the redactions were necessary to preserve this confidentiality according to Michael Lawton, Senior Research Analyst for the Nevada Gaming Control Board:

“It was necessary to redact information contained in the detailed monthly revenue report for April 2020 in a manner that would adequately preserve the confidentiality of an individual licensee’s revenue.”

Translation–there was so little revenue coming in via so few sources that someone with adequate familiarity with the market could figure out what sort of numbers individual licensees were doing. Lawton also indicated that 184 of the state’s 442 non-restricted gaming licensees had no gaming activity at all.

Gaming Industry May 28, 2020 by Jared Block
Next article

Cashless Casino Gaming Could Be Part Of COVID-19 Pandemic Legacy