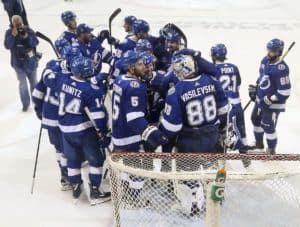 The National Hockey League regular season is at its symbolic halfway point with the annual All Star Break. At the ‘far turn’, the NHL futures betting odds show the Tampa Bay Lightning as favorites to win the Stanley Cup at +385. This is a somewhat short price given the quality of competition they face including the three teams immediately behind them in the betting market—the Toronto Maple Leafs (+700), Calgary Flames (+1000) and Nashville Predators (+1000).

One interesting component of the top four contenders in the Stanley Cup odds marketplace is the presence of two teams from Canada along with a pair of teams from decidedly non-traditional hockey markets in Tennessee and Florida. The same can be said about the next two contenders on the table with the San Jose Sharks and Winnipeg Jets each priced at +1150. The presence of three Canadian teams in the top tier of Stanley Cup competitors is a welcome relief for the country and creates hope that their long championship drought might soon come to an end. A Canada based team hasn’t won the Stanley Cup in 25 years since the Montreal Canadiens defeated the Los Angeles Kings to emerge victorious in 1993. Just as alarming—only five Canadian teams have made the finals since then. In recent years, Canadian teams have been hard pressed to even make the playoffs. This season there should be at least four playoff bound Canadian teams (Montreal, Toronto, Calgary, Winnipeg) and possibly as many as six with Edmonton and Vancouver both within striking distance.

At the other end of the spectrum, the biggest longshot is also a Canadian team as the hapless Ottawa Senators are +30000 to claim the crown. The rest of the bottom feeders include several teams that have enjoyed considerable success during the past decade including the Detroit Red Wings (+25000), New York Rangers (+20000), New Jersey Devils (+20000), Chicago Blackhawks (+20000) and Los Angeles Kings (+17500). Since 1994, this ‘bottom six’ has accounted for a total of 13 Stanley Cup Championships.